IAESTE elects a new President and Board Members

After six years, IAESTE A.s.b.l. elected a new President. Thomas Faltner from Austria was elected by members at the 73rd Annual Conference for a period of two years. Thomas previously held the role of Board Member & Treasurer of the IAESTE A.s.b.l  and has been involved with IAESTE since 2002. Thomas is joined by new Board Members, Mark Feichtinger (for the term 2020-2021), also from Austria and Marcin Jaworski from Poland (for the term 2020-2023). Both Mark and Marcin have been dedicated members of IAESTE for several years and we look forward to working with them.  Also seen in the photo is Dr. Karunakar A Kotegar from India who serves on the Board in the role of Board Member & Secretary and Kristýna Šimková from the Czech Republic, who as the Board Member took over also the Treasurer role and also involved with IT. The new Board is the youngest Board IAESTE has ever had before!

All the Board members, both new and old, are dedicated to delivering on IAESTE’s new Strategy 2025, increasing our exchange numbers to 10,000 by 2025 and being the leader in international Engineering and Science internships around the world.

We would like to say a big thank you to our outgoing President, prof. Bernard Baeyens for his six years of dedicated service to IAESTE as President, and Board Member (2011-2014) He has laid the foundations for our ambitious plans for the future. We also thank Mohammad Hossein Eftekhar for contributing his knowledge and experience to the IAESTE Board for the last two years. 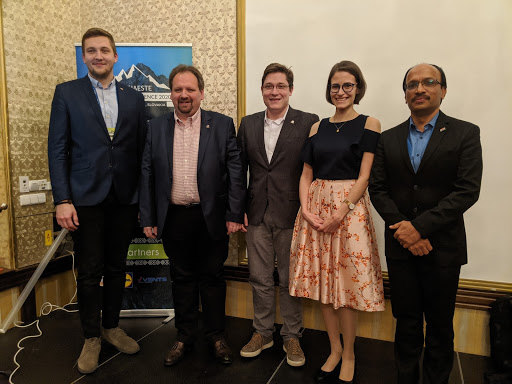