A look back at our founder, Mr James Newby

Not much was known about our founder, Mr James Newby. At least that’s what we thought, but during some research, Imperial College London provided us with a booklet created in 1986 to celebrate Mr Newby’s achievements. Here for you we present the section written by Sylvia M. Newby, who we assume was his daughter. If you have any additional information about Mr Newby or IAESTE’s early years, please get in touch.

James Newby was born of humble parentage in Streatham, a suburb of South London, in February 1893. He attended Eardley Road Elementary School, and left at 14 years of age. Like most people in those days he did not have the opportunity of further education - always a source of great regret to him - but received good basic training, won several prizes, and acquired the incentive to attend evening classes while working for a year or two on a bookstall. The knowledge and experience thus gained enabled him to move to an office job at the Slaters’ Company, and then in 1913 to appointment as Clerk in the Registry of City and Guilds College, a faculty of Imperial College of Science and Technology in the University of London.

From 1914 to 1918 Mr. Newby served with the 2nd East Surrey Regiment, mainly in Egypt, returning to City and Guilds on demobilisation, and achieving two promotions by 1929. It was not until five years later that the seeds of IAESTE were sown. How this happened was well described by Mr. Eric Meacock, who succeeded James Newby as Secretary for IAESTE (UK) and wrote his obituary notice in Topic, the Imperial College magazine. “In 1934 some students of the City and Guilds approached the Registrar to ask if they could be given any assistance in finding places to enable them to get some practical experience, connected with their studies, during the summer vacation. James Newby was given the task of helping them. It obviously was not realized that this was, in fact, unleashing latent talents. The request was repeated the next year and, seeing the success of the operation, the Royal College of Science students asked to join in. From this beginning the Vacation Training Scheme was born.”

In 1939 came the Second World War, when the placement of students continued on a moderate scale and Mr. Newby’s energies were very much taken up with Maintenance & Fire Guard duties at the College. At the conclusion of that task, in December 1944, the Chairman of the Governing Body wrote on their behalf: “The Governors remember with satisfaction that in 1938, when the fear of war was imminent, a number of members of the staff volunteered without thought for their own comfort or safety to remain on duty at the College, day and night, in order to safeguard the College buildings and carry on the work of Administration. They remember the excellent service performed by members of the Party in restricting the damage caused by high explosive bombs and in putting out incendiary bombs before the fireguard system was made compulsory by the Government.”

Apparently the idea of international  exchange had come to James Newby before the war began. During the 1920’s and 30’s he and his wife had entertained people of diverse nationalities and races in their home, some of whom kept in touch over the war years, and for whom they felt a warm affection. However, at that time the general climate of opinion was not so favourable towards exchange programs. Mr Newby wrote a paper for the International Labour Review in July 1953 entitled “ The Work of IAESTE,” in which he said: “I recollect that when in 1937 an effort was made to promote this type of exchange of students, the response from industry was apathetic, but on a revival in 1946 there seemed to be a complete change of outlook on the part of industry in general.” He made investigations and found that several countries had been trying to obtain places abroad in which their university students could gain experience.

In 1948 James Newby initiated a conference, held at Imperial College from 5 to 9 January, when organizers from ten European countries met to agree upon a framework for the bilateral exchange of student trainees, and form an association to be called IAESTE, of which he was elected General Secretary. Speaking at the IAESTE annual conference in Amsterdam in 1978, the then-General Secretary Mr. Karl Kochle of Switzerland, recalling that event of 30 years before, said: “It would be hard to exaggerate Mr. Newby’s merits. I realized that when I recently looked again through some of IAESTE’s first annual reports, I was astonished at how much was being achieved then by very few people with extremely modest means.”

For the next decade James Newby held the position of Secretary of IAESTE (UK) and of the International Association. He travelled widely in Europe, Canada and the U.S.A. (whose participation in the Association brought him a great deal of satisfaction and pleasure), always seeking more countries for affiliation, and more universities to exchange students. This in addition to carrying out various organizing activities for Imperial College, such as the annual Commemorative Day celebration in the Albert Hall (two of which occasions were attended by Royalty) and re-organization of the Central Dispatch Office.

Mr. Eric Meacock, in the obituary, also wrote: “As with many a scheme, so with IAESTE the idea was good but much spadework was necessary to develop it. It was James Newby, supported by a small but efficient office staff, who supplied the energy to forge ahead. The paperwork forms were designed by him and, 30 years later, the initial format is in use with minor alterations; the operation of the scheme itself is practically the same as that initiated by him.”

Early in 1958 Mr. Newby handed over the responsibilities of the General Secretaryship of IAESTE to Mr. Beijer of Sweden, continuing as Secretary of IAESTE (UK) until he retired in 1966. Mr. Meacock comments here: “But his enthusiasm had not waned. The national representatives, y unanimous vote, elected him ‘Honorary Adviser to IAESTE’ and at annual meetings his voice would be heard ‘straightening them out’, as he would call it. As often as his failing health would permit, he visited the Annual Meetings, and this year [1978 - the year of his death] he was at the Meeting in Holland, still ‘putting them straight.’”

In 1953 the French Ministry of National Education, recognizing the value of the work of IAESTE and the service that James Newby had given to it, presented him with the award of Officier d’Academie, for “service rendus a la cause Francaise.” In 1966 Manchester University (UK) awarded him the honorary degree of Master of Arts. In his citation the then-Precentor of the University, the Rev. Gordon Rupp, said: “Mr. Chancellor, you see before you an inventor, the creator of IAESTE, the International Association for the Exchange of Students for Technical Experience, a fruitful device for turning students into intercontinental missiles in a manner profitable to learning, to the advancement of commerce, and the growth of international understanding.

T.W. Manson used to say: ‘The Vac. cometh when no man can work’ and for the modern student the Long Vacation has come to mean a succession of glorified ‘bob-a-job’ weeks. When in 1948 the Imperial College of Science appointed Mr. James Newby as the Vacation Work Organizer, his might have seemed a desperate enterprise. Student exchange itself was no solution: there is nothing like foreign travel for narrowing the mind - witness the hosts who return from Majorca or the Costa Brava more provincially Mancunian than ever before. But send them out to other lands one by one, into prepared places of industry and technical learning built into a pattern at one end of which are great industrial corporations and at the other some hundreds of landladies from many nations, and here you have a creative enterprise which has prospered as it deserved to do, and which has been paid the complement of imitation by other bodies in the United States and elsewhere.  In 20 years the number of countries involved has grown from eight to 28, and more than 85,000 students have taken part. At the heart of this splendid and benevolent spider’s web has been a man of immense and careful industry, humanity and perception.” In 1967 came the honour that he especially valued, Fellowship of Imperial College.

James Newby’s enthusiasm for work was boundless, but his home meant a great deal  to him as well. He married Mabel Bellamy in 1917, and had one daughter, born in 1920. His wife was of a retiring disposition, and did not share much in all these activities, but on his retirement he paid tribute to the value of her loving care and support, and said he knew that he would not have been able to do what he had without it. His only hobby was his garden, which always looked immaculate in his most active years.

Mr. Newby died of cancer after a short illness in April 1978, and even to the end remained quite surprised at what he had been able to achieve, and grateful to those who had shared with him in the building of IAESTE, particularly Cynthia Love, Eric Meacock and Helen Collard, who all worked alongside him for many years.

Reprinted from ‘James Newby Award’ booklet published by AIPT in 1986 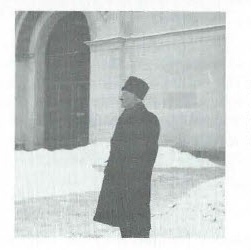